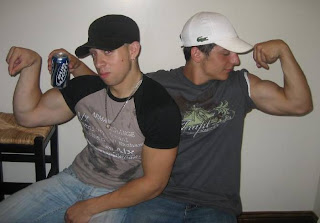 The fellow on the left has quite the arm. Two things: first, his biceps are markedly bigger than those of his more average sized buddy. This kind of comparison shot is pretty cool. Seeing muscular guys next to regular guys just makes the big boys look bigger. It’s even cooler when both are flexing, comparing muscle size. It’s bold on the part of the average guys to open themselves up to looking so small, and its just plain cocky of the bigger guys to show off what they’ve got.

Second, although I’m not wild about seeing the beer can, just a quick glance shows that the bigger guy’s biceps are just about as tall as the beer can. That is big! See, now that’s another cool comparison. Beer can’s, we all know how big they are. It’s a cool mental comparison.

The other thing I like about this young muscle man’s pose: he knows how to pose to show off both his biceps and his fore arms. That fore arm of his is like Popeye big. Very, very cool. Almost as big as his monstrous arms.  His buddy, if he rotated his fist around roughly 180 degrees, would have a more successful pose, it would make both his biceps and fore arm look a little bigger and make a far better comparison to that of his bigger friend.  Of course the bigger guy would still woop his ass.