Thanks to two of my readers who shared some awesome links, I’ve been able to get access to two treasure troves of work by Mbbbb. 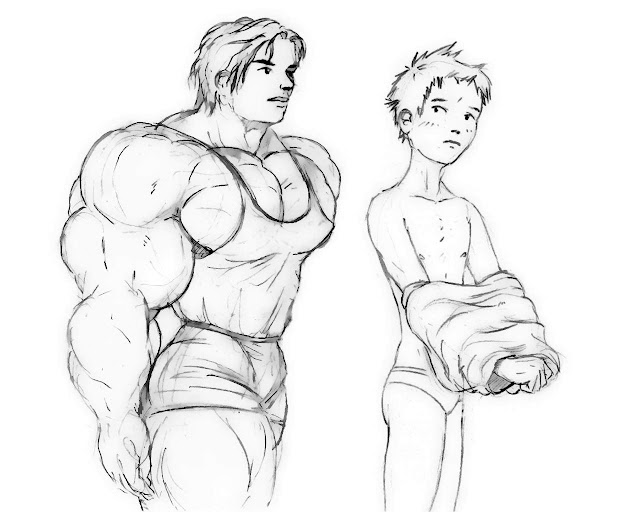 This picture is called “Beginner 2”. Imagine the locker room scene.  The little guy has just joined and hopes to get in shape.  He turns around to see this massive muscle man standing next to him.  The muscle man’s arms are bigger than the little guy’s chest.  Now, that’s got to be discouraging for a beginner!  Notice how the figures are distinctly separate, joined only by proximity and the line of sight of the little guy’s gaze toward the bigger guy. 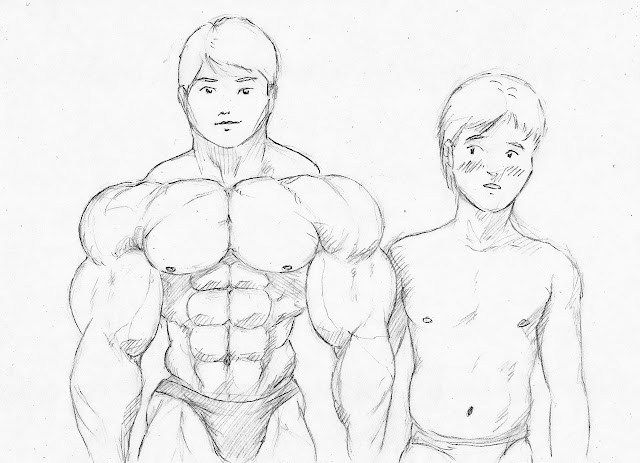 This second picture is called “Far Away – So Close”.  It is another comparison of a little guy to a big guy.  I expect that the setting might be a locker room, swimming pool or beach.  The title gives us some idea of the dynamic between the two characters.  Notice how here the two figures are overlapping. The the little guy is just behind the bigger one, his right arm being blocked from our view by the bigger guy’s massive left arm.  As a composition it is slightly more complex because the figures overlap.  But again the interaction between the characters is limited to the longing gaze of the little guy.  Although the two figures are easy to compare, because of the static nature of the composition, the comparison is less compelling. 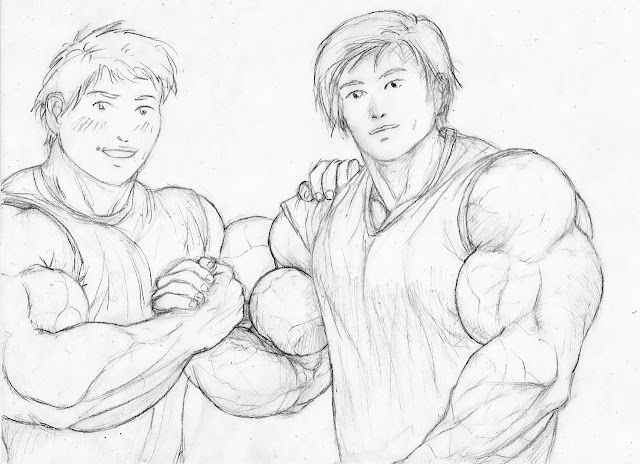 The third picture is called “Friends”.  Here the composition is slightly more complex.  The two overlapping figures are clasping their hands together and one has his other hand up on his buddy’s shoulder.  The focus of the picture is the bent arm of the figure on the right.  But there the four sets of biceps running across the middle of the picture, with two seen from the front and two from the back sets up an interesting, though not fully resolved dynamic to the picture.  I like this image with two hot muscle men expressing their friendship.

The fourth drawing is called “Hammers”.  This is an apparently “unfinished” sketch of two massive muscle men.  It is similar in composition to “Friends” above.  It has two buff figures, with a focus on their hammer-like biceps.  The figures are overlapping, one has his hand on the shoulder of the other, possibly restraining him.  They are so well matched in size, they could almost be the same guy seen from the front and from the back.  I love the way their oversized biceps dominate the picture.  Notice how both men’s biceps are bigger than their waists! 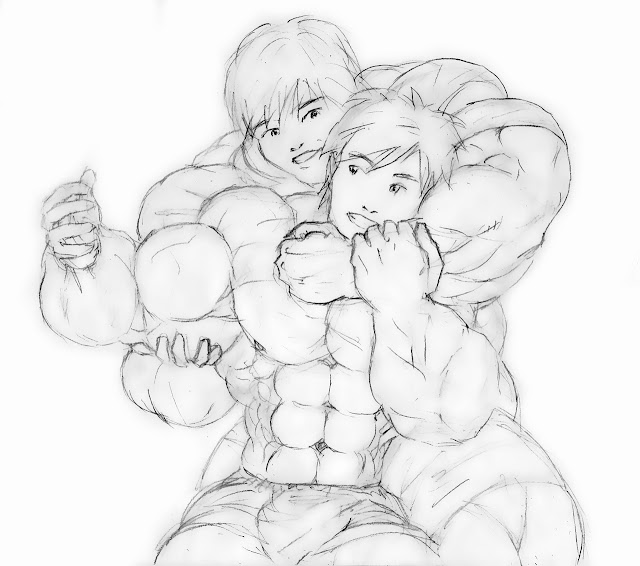 The fifth drawing is called “Two Brothers”.  This is perhaps the most complex two figure composition that I have seen by Mbbbb.  Here, two young muscle gods are wrestling, perhaps for dominance?  Visually the composition is a cross, with one vertical from the forward figure’s crotch running up his abs to the heads of the two men.  The horizontal of the cross runs from the forward figure’s outstretched right hand on the left of the drawing along his arm and shoulder to the clenched fist of the back figure and along the back figure’s arm and then curving up around his shoulder.  Here the two figures are seriously interacting with one another!  It is a dynamic composition; one that allows a fun comparison of the two muscle gods’ physiques.  The back brother’s quad is much bigger than the forward brother’s waist.

You can see Mbbbb’s skill in composing drawings develop in this series of drawings.  There are no dates that I can find associated with these drawings, so the order of development is pure speculation on my part.  He did make a few drawings with three and more figures.  But the majority of his drawings are either solo figures or pairs of figures.  He was on his way to creating some really interesting and sophisticated groupings of musclemen and  or musclemen and their admirers.