This is the third and final post in my series featuring the muscle art of the artist known as Mmmb.  I personally miss his posting on the internet and hope that he will be able to do so again in the future.  These are some more of my favorites by him.

This first is called “New Classmate”.  I’m assuming the muscle boy is the new classmate.  This is a little more cartoony that some of Mmmb’s other work.  But I like it.  I like the way the scrawny guy is kind of fading into the background.  It communicates how, as the muscle boy looks right at us, the rest of the world kind of fades away for us.  I like the compared expressions on their two faces.  One confident the other simply amazed.  I would have loved to have had a classmate like this muscle boy when I was in school.  And check out his rack!  Damn, pecs to die for. 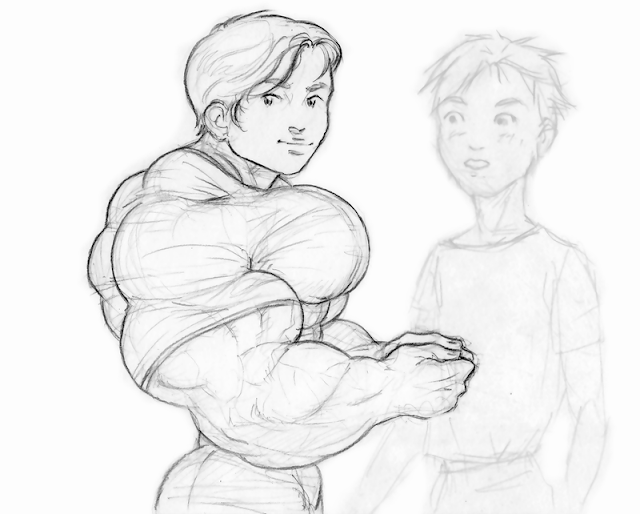 The second drawing is called “Arm Wrestling”.  I love the representation of the big muscle bull straining to put down the younger muscle stud, who doesn’t appear to be too concerned.  It’s like he’s just toying with the bald guy, waiting to slam his opponent’s arm to the table.  I also like how the big muscle bull on the left is contrasted against the scrawny admirer on the right.  The scrawny guy is so intent on his admiration of the younger muscle stud’s biceps that he isn’t even paying attention to the competition which is underway.  And our hero, we know he’s going to win, is at the center of the composition simultaneously toying with both the muscle bull and the muscle queen.  I could go on, but, woof. 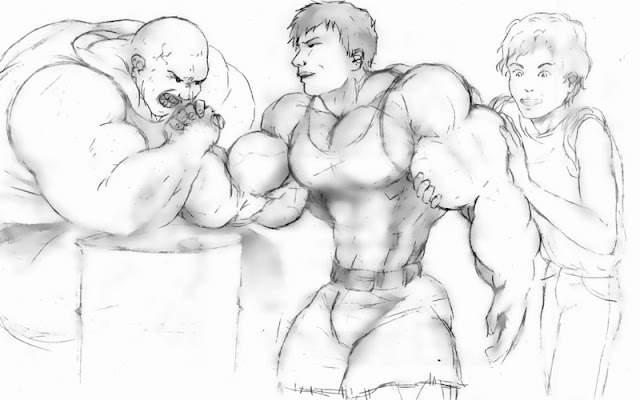 The third drawing is called “A Fair Fight”, though it clearly isn’t.  I think it’s funny that the little guy is actually looking at his own puny arm, not the junior muscle god who’s about to toy with him.  Think of how the little guy in this drawing must feel.  Imagine the muscle and strength admiration that compelled him to ask or agree to arm wrestle the junior muscle god on the opposite side of the table.  He’s anticipating the feel of his hand getting squeezed in the bigger man’s hand, maybe crushed by the brute’s strength.  He’s wondering if the young muscle god is going to slam his hand to the table in an explosive display of strength, or if his opponent will play with him, letting him struggle in vein against vastly superior strength.  Given the way the young muscle god isn’t even looking at his scrawny opponent, I’m guessing that he’ll be toying with the little guy just so he can really display just how overpoweringly strong he is, to really dominate and demean the little guy in public.  Love the comparison of the little guy’s physique to that of the junior muscle god. 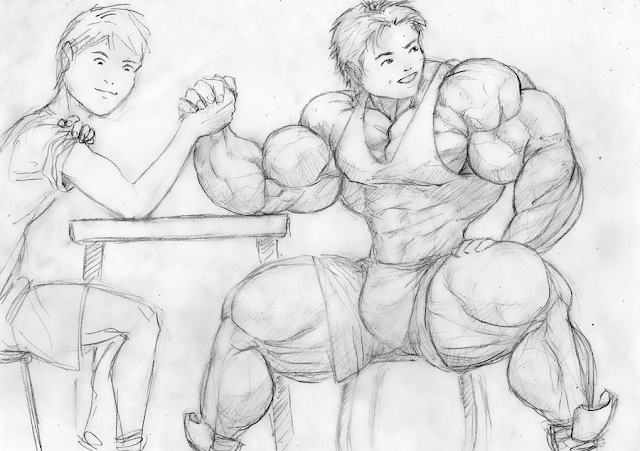 The fourth drawing is called “Goodbye T-shirt”.  For a long time, I hadn’t really looked at this drawing and thought it was just a guy posing.  But no.  He’s literally ripping his shirt off!  There’s so much to love: the look of happy nonchalance on his face has he rips his shirt right off his own body; the bulge of his pec as he reaches across his torso, the way his biceps are as big as his waist, the way his fore arms are as big as his head.  He’s a young muscle beast with strength and power to spare.  And we get to watch! 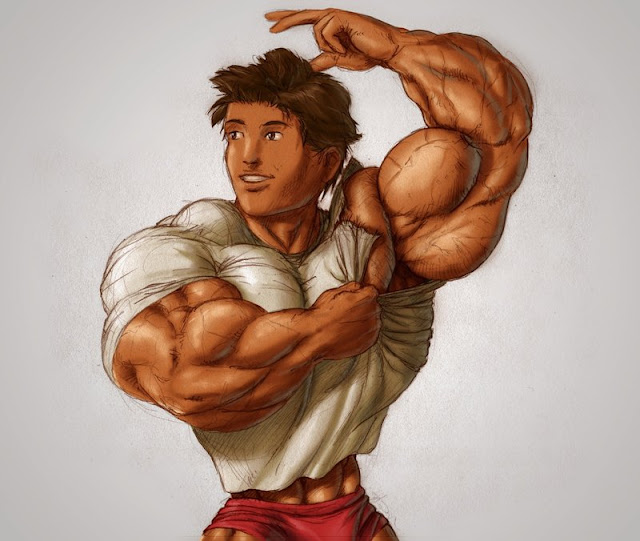 The fifth drawing is called “Big Tetsuo”.  I don’t know anything about the story behind this drawing.  It is another of the more cartoony images.  Tetsuo has all of Mmmb’s typical characteristics that just turn me into a whimpering puddle of muscle worhipping submissive.  Beyond that, I love the determination in his face as he strides out toward us.  The quads bigger than his waist, the swollen pecs shrink wrapped in a body hugging tank top, the biceps as big as his waist and fore arms as big as his head.  He’s a man on a mission and I hope his mission is me! 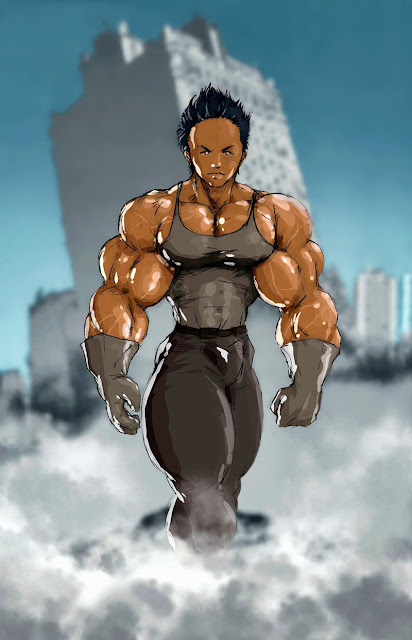 The final drawing is called “V Is For…”  This mountain of muscle is headed into the “pump room” which is a phrase that is ambiguous enough to make my mind reel.  I think the way Mmmb had drawn the fabric snug around the impossible biceps yet draping over the mountainous pecs, hanging loose around his waist captures and hints at just how big this guy probably is.  He has even more cuts and definition in his arms than many of Mmmb’s other muscle men and that gets contrasted against the smoothness of the fabric over the guy’s chest.  I like how he flashes us both a smile and a peace sign has he heads in.  He’s acknowledging us while he goes someplace where we probably can’t.  Sometimes being denied by a dominant muscle man can be exquisite torture by the submissive.  But imagine how the big guy is laughing! 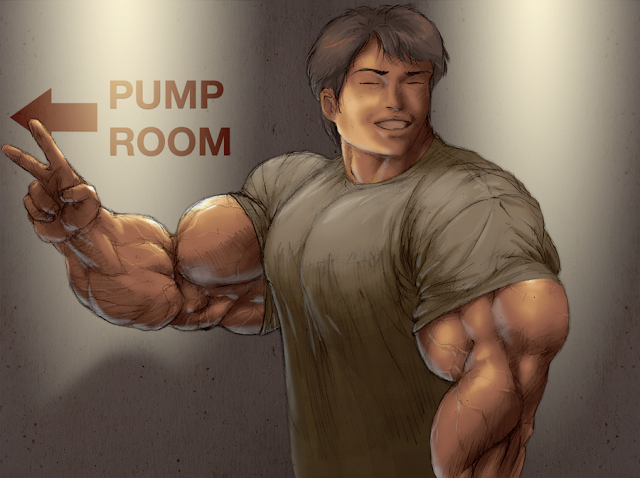 I hope that you’ve enjoyed this series of posts featuring the magnificent muscle art of Mmmb.  As before, if you know where I can find more of his muscle drawings or photo manipulations, please let me know.  Now I need to go take a cold shower.