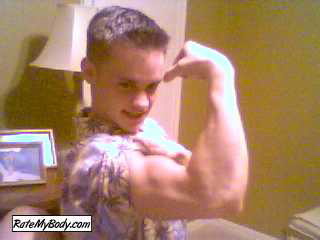 Another Classic Musclany post. This one is about one of my favorite kinds of muscle: the unexpected.

And one I enjoy a lot: unexpected muscle: muscle on guys on whom you don’t expect it. Muscle can be unexpected for different reasons: youth, age, build, prior knowledge. There’s nothing that’ll take my breath away more than unexpected muscle. This young man is a great example of unexpected muscle. You look at his face and figure because of his youth that he won’t have muscles like that! His guns are way bigger than his years might suggest. First, is the surprise that a guy that young has muscles like that, then the speculation about just how strong he might be. 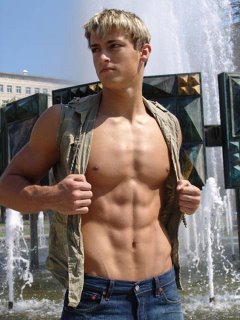 Then there are guys like this one, on the left, who don’t look like much with clothes on, but then they take off their shirts and they’re built like brick walls; cobbled abs and ripped pecs that look like they belong on a bigger guy. The disjunction between the lack of size associated with muscle men and the defined, well formed and formidable muscle, evidence of strength, dedication and endurance that you just didn’t suspect is terrifically hot. 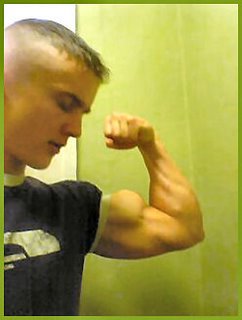 Another great example of unexpected muscle are guys whose muscle just seem to explode with size and power when they flex. I suspect that this guy, on the right, has a nice arm and a decent build when he’s relaxed and unflexed. But when he flexes his biceps they explode with size, balling up into an honest to goodness baseball sized mound of hard muscle. It’s massive and defined, a spectacular example of muscular form. 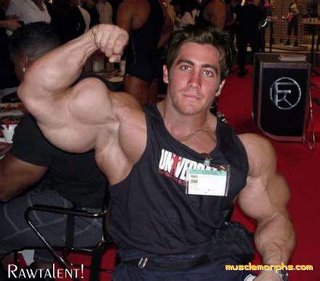 Then, perhaps the best kind of unexpected muscle, is discovering muscle on people you know in some way but without muscle. I think this is why I enjoy celebrity muscle morphs. I’m familiar with the actor and know his body, or think I do and then, bam! The guy is huge! Seeing skinny or even nicely built celebrities pumped up well into the realm of bodybuilder proportions or beyond is so exciting. They’re always handsome, but handsome with muscle, is hotter. Handsome with big, big muscle is even hotter.

When you have a friend who starts working out, then keeps at it over the months and years, you can constantly have those kind of unexpected muscle moments. In your memory, they will always have the build they had when you first met them. As their bodies lean out and grow with dense, hard muscle, every time you see them, it’s like, damn! Where’d all that beef come from? It’s a momentary surprise, then you remember the training and the dedication and you know where it came from. But that flash of surprise is something you experience every time you see them. The bigger they get over the years, the greater that sense of surprise.

[I have a very good friend who has been dedicated and diligent about his training. He’s a hard gainer, so he hasn’t gotten huge. But he has managed to gain about 25 pounds over the last 20 years. In my head, he’s still the skinny drink of water he was when we met. Everytime I see him now, I’m like, “damn, the boy got BIG”. And he loves it.]

If you haven’t seen the person in a long time, then the sense of surprise is heightened and prolonged. When you run into a friend from high school or college years later and find they’ve discovered the gym in the intervening years, building themselves up into buff and beefy examples of manhood, it’s all you can do to keep from asking them to flex for you! And because you haven’t seen them in years, you can question them at length about their training, transformation, motivation and ask the question all weight trainers dread: so, how much you bench? All you want to do is talk about how freaking amazing they look now. and you know what?  They love it! That’s all they want to talk about, too! At least i hope so.